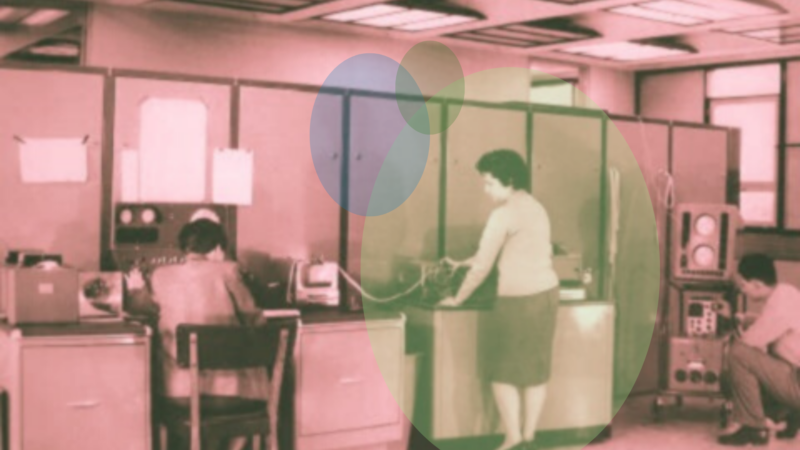 “Clementine Computer” (1962). Photograph of the History Program of the FCEN – University of Buenos Aires, with permission to be used for study, research and teaching purposes. Edited by Global Voices. Source.

Few people know that Argentine women have played a significant part in Latin America’s computing history. In the 1960s, the first programming language in Argentina was created, called “Compilador del Instituto de Cálculo” (“Compiler of the Calculus Institute,” ComIC for short). This is a story of technological appropriation by programmers, mathematicians, and pedagogues in a historical context full of technological and political transformations.

A programming language is a set of “grammatical rules” and instructions for a computer. So, in a way, women taught Argentina’s first scientific computer of the time “to speak.”

Only a few years after women were allowed to vote in Argentina, and in a tumultuous context that saw the birth of several dictatorships, a group of women students who had recently graduated from the first generation in Scientific Computing at the University of Buenos Aires built ComIC to complement the national computer “Clementina.” At that time, computing was considered a public service.

This kind of story is not usually part of the recognized history of computing, and the role of women was erased or forgotten, even though they were a foundational part of it. Uruguayan programmer Gaba, who asked to be identified with her nickname because it is her public identity, emphasized to Global Voices that we all have technology stories and it is important to recover them.

Recovering history with our technology, in this case history in Argentina and women in the development of technology, is also a part of recovering our own history.

At that time, computing was not considered a more male-oriented field, unlike today where women are a minority in STEM. Researcher Sasha Costanza-Chock recounted in her book Design Justice:

Programming languages are marked by their historical context, and ComIC is no exception. Mexican programmer and carpenter Federico Mena Quintero told us:

Gaba has her own definition from her experience working for the Tor Project, an organization that defends freedom on the Internet with open networks and open software.

At that time, computing was considered a public service, since universities managed the few computers that were available in Latin America for scientific and academic purposes and for the needs of governments. Therefore, this programming language was developed for the first scientific computer in Argentina, also known as Clementina, installed at the Calculus Institute of the University of Buenos Aires, which was used to solve problems ranging from the study of rivers in the area by means of mathematical models to the processing of the National Census of 1960.

At that time programming languages were custom written for each computer and not for widespread use across multiple computer models. So the story of the Clementine computer is necessary to tell the genesis of the creation of ComiC.

Argentina’s first scientific computer was named Clementina, which is taken from the popular U.S. song Oh My Darling, Clementine, which came with the Mercury model computer as a sample computer program. Clementina served between 1961 and 1971 in government agencies in Argentina.

One of the highlights of the women’s group’s work with Clementina was the 1960 National Census. This first task took 30 minutes, one of the leaders of the project, mathematician Rebeca Guber, said on television. She mentioned that in the first three years the computer supported the entire Argentine state because it was the only one. It was its best years because it went from the first 30-minute task of the National Census to working 24 hours a day, seven days a week.

In the words of Manuel Sadosky, who led the negotiations for the purchase of the computer, quoted in the book “Manuel Sandosky, el Sabio de la Tribu” (“Manuel Sandosky, the Wise Man of the Tribe”):

For the first time, a computer was used for data development and evaluation, which saved a lot of time. Before, it took about ten years just to process the data.

Also, the women’s group created the ComIC programming language specifically for Clementina, whereas before the computer ran on the Autocode language. Autocode refers to a set of programming languages developed between 1950 and 1960. Noemí Susana Silvia García, one of the programmers, said:

This group needed a new more user-friendly language than Autocode and the new language project, called COMIC (Compiler Institute Calculus Compiler), was developed and implemented in its entirety by the group led by Professor Wilfred Durán and integrated by Clarisa Cortes, Cristina Zoltán, Liana Lew and myself.

Clementina worked well until the Argentine Federal Police violently evicted students and professors from five academic faculties of the University of Buenos Aires in 1966 in what became known as La Noche de los Bastones Largos (The Night of the Long Batons). This event marked the end of the research work and the subsequent decline of Clementina, despite technical efforts to keep the computer operational. The academic faculties had been occupied by students, professors, and graduates who opposed the political intervention of the military government of General Juan Carlos Onganía in university affairs.

After the eviction, there was a massive resignation. Of a team of 70 people, only seven technicians remained, Guber summarized. Many of the core and foundational team of the project under the Clementina umbrella went into exile. In the words of Victoria Bajar, the first programmer to graduate from the Scientific Computer program:

There was a discontinuity, but [the work] was sown elsewhere. And in those other parts it blended with the experiences of those other places.

Gaba concludes by asking why this part of technology’s history was erased and how we can recover it.